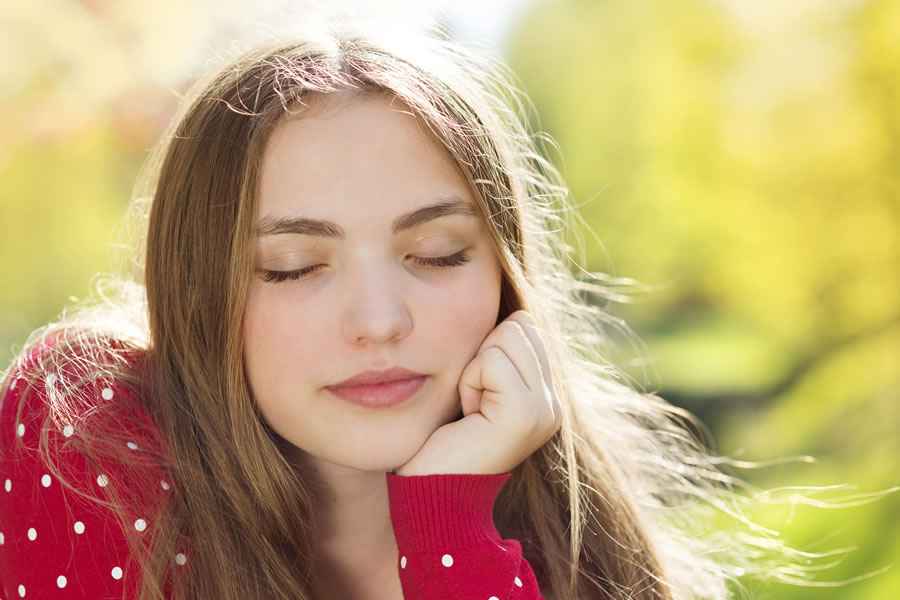 This article is an excerpt from Perfect Sight without Glasses, by Dr. William H. Bates. It shows how creative use of the imagination and memory can give a person a pathway back to clear vision. - gm

When one treats patients who are willing to believe that the letters can be imagined, and who are content to imagine without trying to see, or compare what they see with what they imagine -- which always brings back the strain -- very remarkable results are sometimes obtained by the aid of the imagination.

Some patients at once become able to read all the letters on the bottom line of the test card after they become able to imagine that they see one letter perfectly black and distinct. The majority, however, are so distracted by what they see when their vision has been improved by their imagination that they lose the latter. It is one thing to be able to imagine perfect sight of a letter, and another to be able to see the letter and other letters without losing control of the imagination.

In myopia the following method is often successful:

First look at a letter at the point at which it is seen best. Then close the eyes and remember it. Repeat until the memory is almost as good as the sight at the near point. With the test card at a distance of twenty feet, look at a blank surface a foot or more to one side of it, and again remember the letter. Do the same at six inches and at three inches. At the last point note the appearance of the letters on the card—that is, in the eccentric field.

If the memory is still perfect, they will appear to be a dim black, not grey, and those nearest the point of fixation will appear blacker than those more distant. Gradually reduce the distance between the point of fixation and the letter until able to look straight at it and imagine that it is seen as well as it is remembered. Occasionally it is well during the practice to close and cover the eyes and remember the letter, or a period, perfectly black. The rest and mental control gained in this way are a help in gaining control when one looks at the test card.

Patients who succeed with this method are not conscious while imagining a perfect letter, of seeing at the same time an imperfect one, and are not distracted when their vision is improved by their imagination.

Many patients can remember perfectly with their eyes closed, or when they are looking at a place where they cannot see the letter; but just as soon as they look at it they begin to strain and lose control of their memory. Therefore, as the imagination depends upon the memory, they cannot imagine that they see the letter.

In such cases it has been my custom to proceed somewhat in the manner described [previously]. I begin by saying to the patient: "Can you imagine a black period on the bottom of this letter, and at the same time, while imagining the period perfectly, are you able to imagine that you see the letter?"

But even after they have done this, they may still not be able to imagine the whole letter without losing the period. One may have to coax them along by bringing the card up a little closer, then moving it farther away; for when looking at a surface where there is anything to see, the imagination improves in proportion as one approaches the point where the sight is best, because at that point the eyes are most relaxed. When there is nothing particular to see, the distance makes no difference, because no effort is being made to see.

When patients become able to see a known letter by the aid of their imagination, they become able to apply the same method to an unknown letter; for just as soon as any part of a letter, such as an area equal to a period, can be imagined to be perfectly black, the whole letter is seen to be black, although the visual perception of this fact may not, at first, last long enough for the patient to become conscious of it.

In trying to distinguish unknown letters, the patient discovers that it is impossible to imagine perfectly unless one imagines the truth; for if a letter, or any part of a letter, is imagined to be other than it is, the mental picture is foggy and inconstant, just like a letter which is seen imperfectly.

The ways in which the imagination can be interfered with are very numerous. There is one way of imagining perfectly and an infinite number of ways of imagining imperfectly. The right way is easy. The mental picture of the thing imagined comes as quick as thought, and can be held more or less continuously. The wrong way is difficult. The picture comes slowly, and is both variable and discontinuous.

This can be demonstrated to the patient by asking him first to imagine or remember a black letter as perfectly as possible with the eyes closed, and then to imagine the same letter imperfectly. The first he can usually do easily; but it will be found very difficult to imagine a black letter with clear outlines to be grey, with fuzzy edges and clouded openings, and impossible to form a mental picture of it that will remain constant for an appreciable length of time.

The letter will vary in color, shape and location in the visual field, precisely as a letter does when it is seen imperfectly; and just as the strain of imperfect sight produces discomfort and pain, the effort to imagine imperfectly will sometimes produce pain. The more nearly perfect the mental picture of the letter, on the contrary, the more easily and quickly it comes and the more constant it is.

Some very dramatic cures have been effected by means of the imagination. One patient, a physician, who had worn glasses for forty years and who could not without them see the big C at twenty feet, was cured in fifteen minutes simply by imagining that he saw the letters black. When asked to describe the big C with unaided vision he said it looked grey to him, and that the opening was obscured by a grey cloud to such an extent that he had to guess that it had an opening.

The explanation of this remarkable occurrence is simply relaxation. All the nerves of the patient's body were relaxed when he imagined that he saw the letters black, and when he became conscious of seeing the letters on the card, he still retained control of his imagination. Therefore he did not begin to strain again, and actually saw the letters as black as he imagined them.

The patient not only had no relapse, but continued to improve. About a year later I visited him in his office and asked him how he was getting on. He replied that his sight was perfect, both for distance and the near-point. He could see the motor cars on the other side of the Hudson River and the people in them, and he could read the names of boats on the river which other people could make out only with a telescope. At the same time he had no difficulty in reading the newspapers, and to prove the latter part of this statement, he picked up a newspaper and read a few sentences aloud. I was astonished, and asked him how he did it.

Another patient, who had a high degree of myopia complicated with atrophy of the optic nerve, and who had been discouraged by many physicians, was benefited so wonderfully and rapidly by the aid of his imagination that one day while in the office he lost control of himself completely, and raising a test card which he held in his hand, he threw it across the room.

"It is too good to be true," he exclaimed; "I cannot believe it. The possibility of being cured and the fear of disappointment are more than I can stand."

He was calmed down with some difficulty and encouraged to continue. Later he became able to read the small letters on the test card with normal vision. He was then given fine print to read. When he looked at the diamond type, he at once said that it was impossible for him to read it.

However, he was told to follow the same procedure that had benefited his distance sight. That is, he was to imagine a period on one part of the small letters while holding the type at six inches. After testing his memory of the period a number of times, he became able to imagine he saw a period perfectly black on one of the small letters. Then he lost control of his nerves again, and on being asked, "What is the trouble ?" he said:

"I am beginning to read the fine print, and I am so overwhelmed that I lose my self-control."

In another case, that of a woman with high myopia complicated with incipient cataract, the vision improved in a few days from 3/200 to 20/50. Instead of going gradually down the card, a jump was made from the fifty line to the ten line. The card was brought up close to her, and she was asked to look at the letter O at three inches, the distance at which she saw it best, to imagine that she saw a period on the bottom of it and that the bottom was the blackest part. When she was able to do this at the near-point, the distance was gradually increased until she became able to see the O at three feet. Then I placed the card at ten feet and she exclaimed:

"Oh, doctor, it is impossible! The letter is too small. It is too great a thing for me to do. Let me try a larger letter first."

Nevertheless she became able in fifteen minutes to read the small O on the ten line at twenty feet.