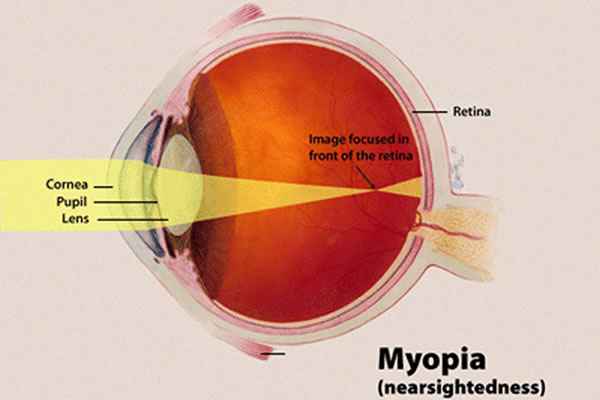 Very Inspiring! This article was published in Dr. Bates' Better Eyesight Magazine. The writer was as grateful for his new sense of vitality and mental clarityas he was thrilled to regain clear vision. -gm

Original Editor's Note.—The writer of this article, a young man of twenty, was wearing, when first seen, the following glasses, prescribed three years earlier: both eyes, concave 6.50 D. S. combined with concave 3.00 D. C. 180 degrees. He also brought with him, from the Mayo Clinic, a later prescription—right eye, concave 9.00 D. S. combined with 4.50 D. C. 180 degrees; left eye, concave 8.00 D. S. combined with concave 3.00 D. C.—which indicated that there had been a very rapid advance in his myopia. [Very high nearsightedness plus very strong astigmatism - gm] The progress, he made in the brief period of six weeks was very unusual.

I was only eight years old when the teacher told me that I couldn't come to school if I didn't get glasses. So, of course; I had to get them, and of course, I hated them. They kept me out of all the games that a boy really likes, such as baseball, and they made me terribly self-conscious.

Every little while I had to get new and stronger glasses. They were changed eight times in the course of the next nine years, by the end of which time I had what the specialists pronounced to be a very bad case of progressive myopia. After that I refused to make any more changes, for I had lost faith in glasses and wasn't interested in tryihg new ones.

Although my eyes kept getting worse all the time, and the specialists said there wasn't a chance of a cure, I always felt sure that sometime I would find a cure, and I tried and investigated everything that seemed to offer any hope of relief. One specialist said that while I couldn't be cured, it would help me to live out of doors. So I gave up my job as a telegrapher, went West and got work in the open air. It didn't do one bit of good. Then I went in for physical culture; but, while this improved my general health, it didn't help my eyes. I tried osteopathy and chiropractic, but they didn't help either. I read all the literature on the subject that T could find, and the invariable assertion of the authorities that my condition was hopeless did not shake my conviction to the contrary. I even made a trip to Rochester, Minnesota, for the sake of visiting the famous Mayo Clinic, where I expected to find all medical Wisdom concentrated. All I got was a prescription for a stronger pair of glasses and a confirmation of the statements of my previous medical advisers, and of the medical books, that myopia was incurable. I remained unconvinced, however.

I now happened to run across an article in the Literary Digest about a method of curing shortsight (this term is still used in the U.K and elsewhere, called nearsightedness in the U.S.A. - G.M.) by squeezing the eyeball, said to have been used successfully to Paris. I wrote for further information but was told that the article was merely a reprint from La Nature and that the office knew nothing more about it. The editor suggested, however, that I write to Dr. Bates who was making a special study of this problem. I had already heard of Dr. Bates through another source, and I lost no time in following this advice. He assured me that my condition was curable, and as I did not want to go to the expense of going to New York I asked him if he could treat me by correspondence. He replied that while he had cured many patients by correspondence, such treatment was slow and a little uncertain, and in a case as serious as mine had better not be relied upon.

As soon as I was able, therefore, I gathered together all the money that I had and went to New York, in spite of a tremendous amount of opposition and no encouragement whatever. Every doctor and every layman to whom I mentioned my purpose said I was crazy to suppose that shortsight could be cured, when all the books said it was incurable. My brother, who is an optician, was so strong in his opposition that I don't think I should ever have got to New York if I hadn't pretended that I was going for some purpose other than the real one - and even after I got there and was able to write to him that my sight was improving, he kept urging me to come home, telling me that any man who pretended to cure shortsight must be a quack, and that if I imagined I was getting any benefit it was because I had been hypnotized.

I arrived in New York on December 17, 1919, and went at once to Dr. Bates. When my eyes were tested with the Snellen test card, I found that at twenty feet I could see only the large letter at the top. I could read large print at five and a half inches, but could not read it any nearer or any farther, and could not see diamond type distinctly at any point.

I put in six hours a day at the office, practicing constantly with the Snellen test card, and at first found it rather discouraging and tiresome. When I tried to palm I saw all the colors of the rainbow instead of black. (refers to Dr. Bates' discovery that imagining black is deeply relaxing, later de-emphasized because it often evoked strain - G.M.) As I could not see anything perfectly, either at the near-point or the distance, I could not remember anything I saw perfectly. Even my own signature I was unable to visualize. Neither could I imagine that the letters on the card were moving when I shifted from one to another, or from one side of a letter to another.

At the end of a week, however, I succeeded in getting the swing, becoming able to imagine not only that the letters on the card were swinging, but that my body and everything that I thought of was swinging also. (The "small swing" is a subtle and powerful way to reactivate the vision.) This universal swing soon established itself so thoroughly that I was unable to stop it and the Doctor had to tell me how. I did it by staring at a letter of fine print for a few seconds. After this things began to go better. As long as I imagined the universal swing I could see black when I palmed and remember it with my eyes open. When I imagined it on the street it was as if a fog had lifted, or the sun had come out from behind a cloud. My sight improved rapidly, and I began to find the practice extremely interesting. I never got bored or sleepy, and, in fact never had such a good time in my life.

Besides improving my sight the swing did many other things for me. I had never done any running before coming to New York, but I now began to experiment with that, form of exercise, not expecting in the least to distinguish myself. In a week, however, I was able to run eleven miles, without fatigue or loss of breath, and without even feeling sore or stiff afterward. This I attributed to the swing, which I kept up all the time I was running. When I did not do this, I quickly became tired. One day I had to visit a [doctor] to have an ingrown nail treated. The first touch was excruciatingly painful. Then the [doctor] turned away to get an instrument, and I began to swing. When he resumed work I felt no pain, and the operation was finished painlessly. Even loneliness seemed to flee before this imaginary rhythmical movement, and it has now become so necessary to my existence that I would even be willing to go back to the hated glasses rather than be without it.

When I left New York on December 31 I was able to make out some of the letters on the bottom line of the test card at twenty feet and to read diamond type from four to eighteen inches, while my eyes, which had previously been inflamed and partly closed, were clear and wide open. Incidentally my memory, which had previously been so poor as to cause me great inconvenience, and for which I had taken several memory courses in vain, had improved as much as my eyesight.